The multi-award winning IVECO Daily Minibus range has grown in Australia. There are now more options, greater safety features, higher comfort levels and cleaner, more efficient Euro 6 rated engines – it’s a combination that has made the Daily one of the most trusted and best-selling minibuses available.

With a sleek and modern European design, the Daily Minibus is available in 11, 16 and 22 seat plus driver models in two trim levels, ‘Shuttle’ and ‘Executive’, to best suit the application. From aged care transport to charter work or rental duties, there’s bound to be a Daily Minibus to suit. And being part of IVECO’s extensive product range, Daily Minibus owners can rest assured that they’ll receive the quality backing and support that will make their ownership satisfying and hassle-free.

The Daily Minibus range is backed by a comprehensive 2 year / 200,000 kilometre warranty.

The range is supported nationwide by a Dealer Network of over 60 outlets including parts and service facilities, ensuring professional backup, whether close or far from home.

To aid vehicle maintenance budgetary control, IVECO offers a range of tailored service packages designed to maximise vehicle uptime by providing owners with total flexibility to develop a maintenance regime to best suit their needs. For a fixed monthly fee, owners can be assured their minibus servicing is taken care of without the stress of needing to find additional funds at the time of servicing.

THERE’S A DAILY MINIBUS FOR EVERY SITUATION

The Daily Minibus range comprises two model variants with three seating capacities including 11 plus driver, 16 plus driver and 22 plus driver. The range begins with the ‘Shuttle 11’ which features a 3520mm wheelbase and ‘H2’ roof (1820 mm standing height).

This vehicle provides seating for 11 plus the driver and has a GVM of 4.5 tonnes, meaning it can be driven on a passenger car licence.

For additional carrying capacity there’s the ‘Shuttle 16’ which is based on a longer (4100mm) wheelbase and provides seating for 16 occupants plus the driver. This variant also features the generous H2 roof ensuring there’s ample overhead height for passengers both when seated and also when entering or exiting the minibus. GVM for the ‘Shuttle 16’ is 6.1 tonnes and requires a light truck licence to drive.

Customers wanting more luxury appointments can opt for the ‘Executive 16’, which offers the same benefits as the Shuttle but with extra, high-end touches including leather seats, timber-look flooring and generous ‘H3’ roof (2010mm standing height) for additional overhead space.

The newest addition to the Daily Minibus line-up is the ‘Shuttle 22’ which shares the same wheelbase, H2 roof height and GVM as the Shuttle 16 but with extra seating capacity.

THE PERFECT FIT FOR YOUR BUSINESS

With its impressive combination of safety features, cleaner running engines, full automatic transmission, generous driver and passenger appointments and 11, 16 and 22 seat options, the Daily Minibus is suited to a wide array of applications. The Daily Minibus is supremely adaptable and provides a high level of performance whatever its vocation.

At the heart of the Daily Minibus range is a powerful yet quiet and efficient Euro 6-rated engine. The F1C, 4-cylinder turbodiesel powerplant features sophisticated ‘Unijet’ common rail injection and four valves per cylinder for added efficiency. Output for the engine is an impressive 180 horsepower (132kW) and features a flat torque curve with maximum torque of 430 Nm from a low 1,500 – 3,000 rpm.

The engine meets the stringent Euro 6 emissions measure – a level not yet mandated in Australia – using a combination of EGR and SCR emission control that does not require driver intervention. Coupled with its clean-running credentials is impressive fuel efficiency performance, leading to lower operating costs. Oil change intervals for the engine are also generous at 40,000 kilometres, further reducing downtime and maintenance expenses.

Matched to the engine is IVECO’s market-leading 8-speed Hi-matic full automatic transmission, delivering crisp and seamless power and providing the driver with the important benefit of reduced fatigue, especially if operating in congested traffic conditions.

To assist in reducing fuel consumption, the transmission features both ‘Eco’ and ‘Power’ modes. When Eco is selected, the transmission changes gears at lower rpm, while Power mode holds the vehicle in each gear for longer for even crisper acceleration should it be required. The unit can also be operated in a manual mode, allowing the driver to select their preferred gear for the conditions, if they choose to.

Passenger safety and the wellbeing of other road users is a priority for IVECO, so the Daily Minibus range delivers an extensive array of standard active and passive safety equipment. Along with three point seatbelts, and the superior stopping power of front and rear disc brakes with ABS, all Daily Minibuses are equipped with a driver SRS Airbag and IVECO’s top-of-the-line ‘ESP 9’ package.

The LDW uses a windscreen-mounted camera which recognises the road markings and sounds an alarm if the vehicle strays from its lane or changes lane without the driver first signalling.

ESP Electronic Stability Program: brakes each wheel and controls the engine by reducing the number of revolutions if the vehicle becomes unstable

ASR Anti Slip Regulator: acts on the engine and the brakes preventing the drive wheels from skidding

HHC Hill Hold Control: acts on the braking pressure to hold the vehicle during uphill departures

TSM Trailer sway mitigation: detects the presence of a trailer and adapts the

ROM Roll Over Mitigation: extension of RMI by mitigation of rollover at quasi-stationary manoeuvres such as motorway exits

For a comfortable ride, all Daily Minibus models are equipped with a front independent torsion bar and rear air suspension. The rear suspension can be electronically adjusted to allow easier ingress and egress to the minibus and the driver is treated to a heated, air suspended seat. Cruise control is also a standard feature across the range, as is the electric bus plug door.

Other standard equipment is the touchscreen IVECONNECT multimedia system boasting radio, CD player, MP3 and DVD player, GPS and reversing camera. Many of these features can be operated via the convenience of steering wheel-mounted controls.

The electric bus plug door provides the convenience of push button door operation for the driver, so they don’t have to leave their seat. This traditional coach style door allows for it to be positioned at the front of the minibus without compromising seating space and results in a smoother one directional flow of passengers on entry or exit. 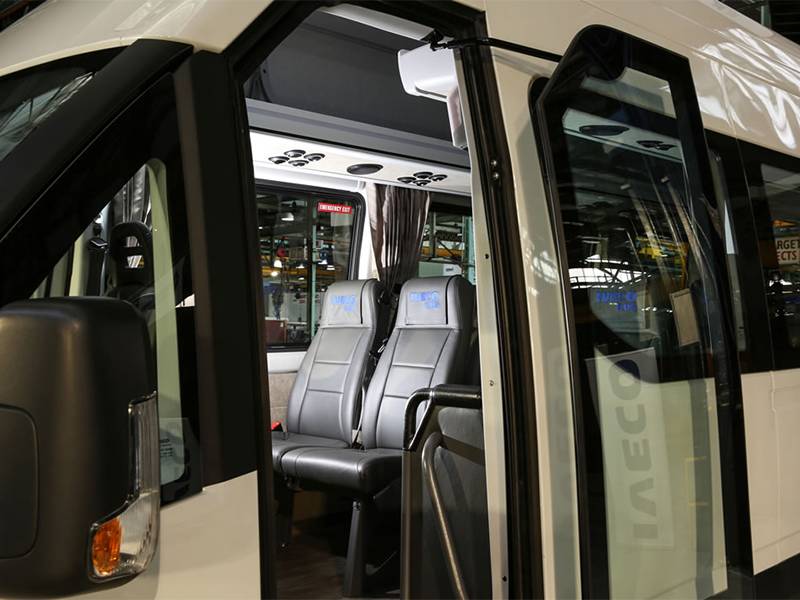 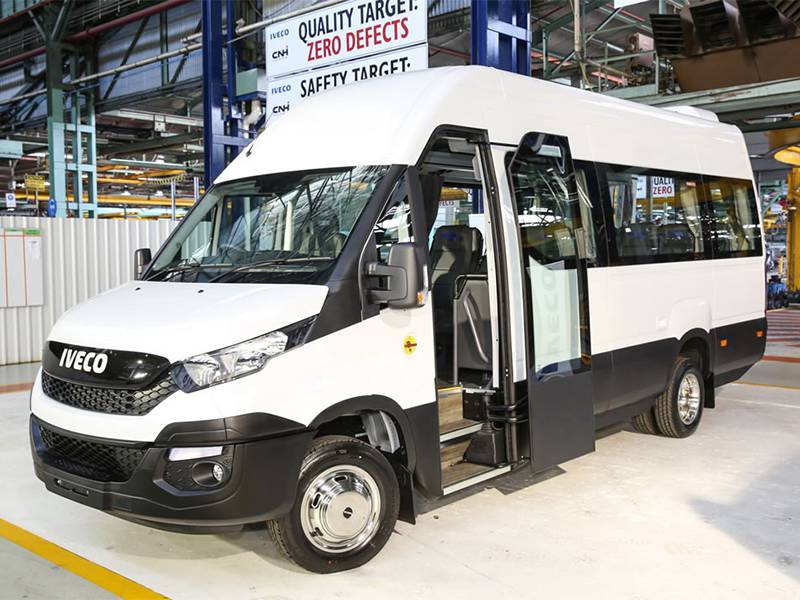 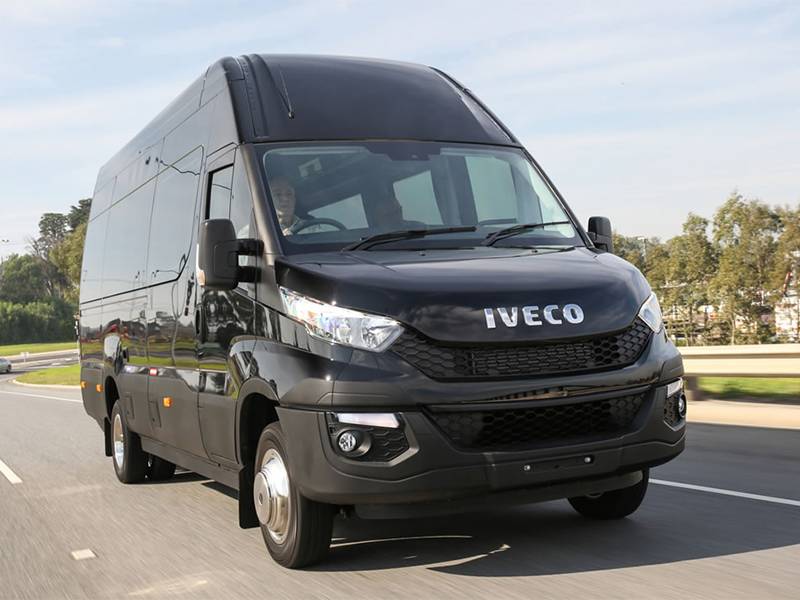 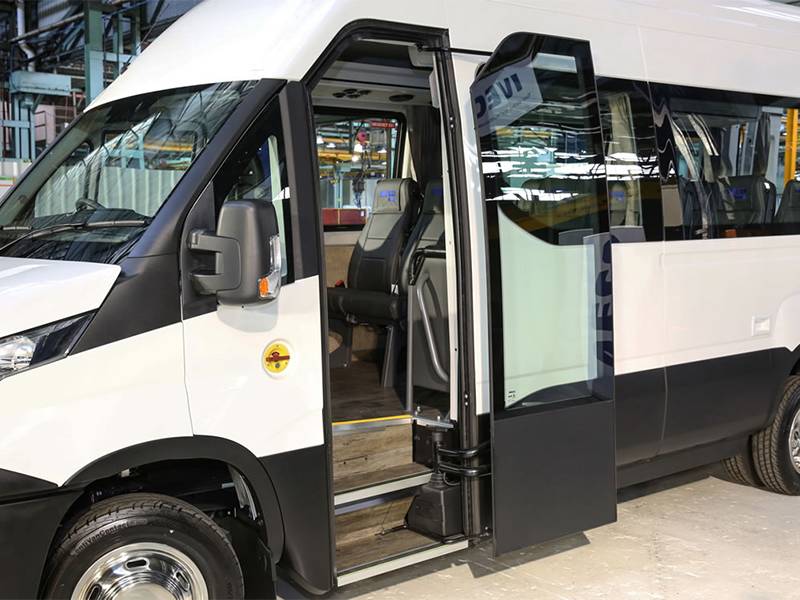 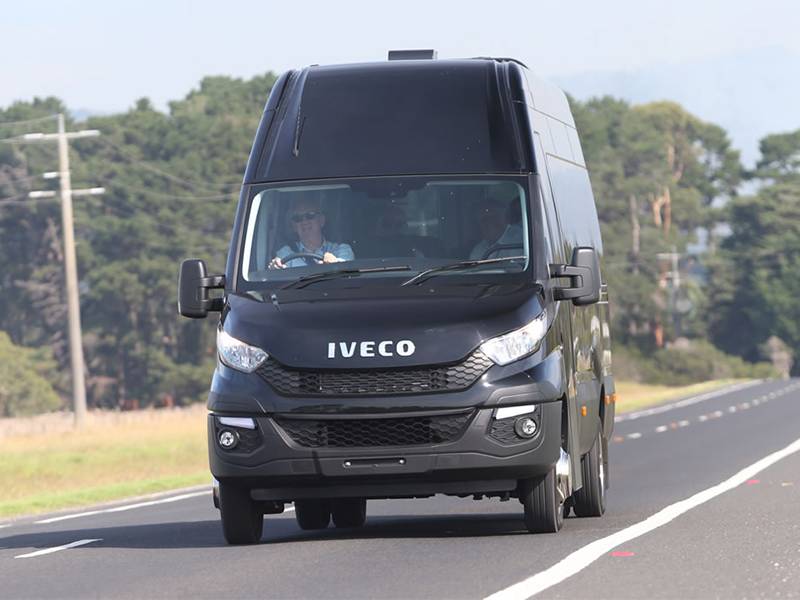 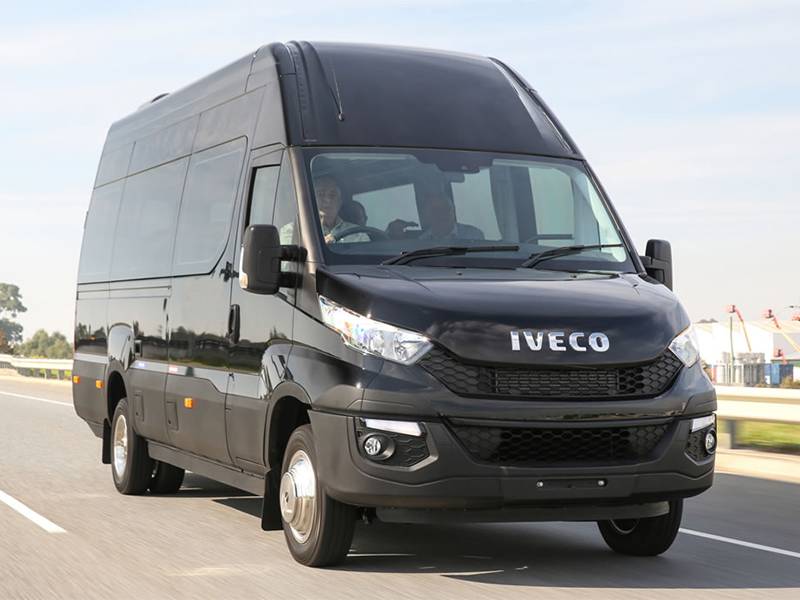 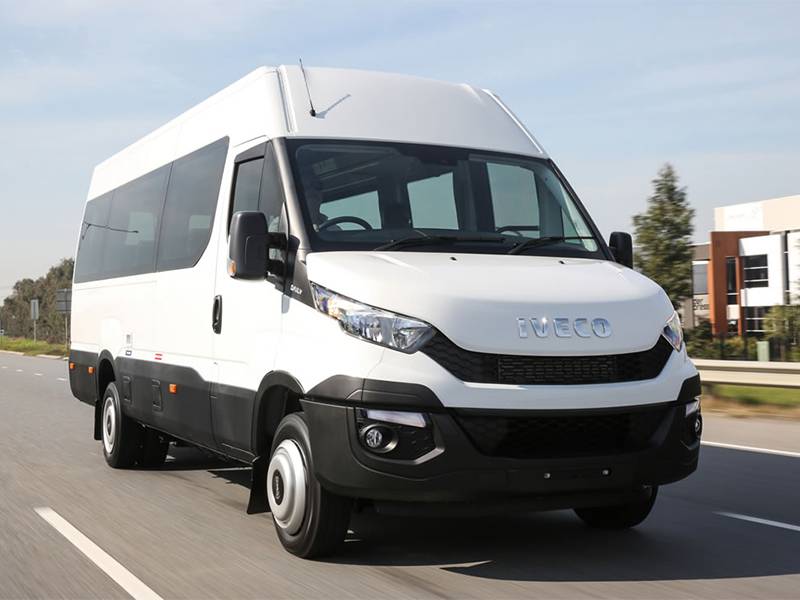 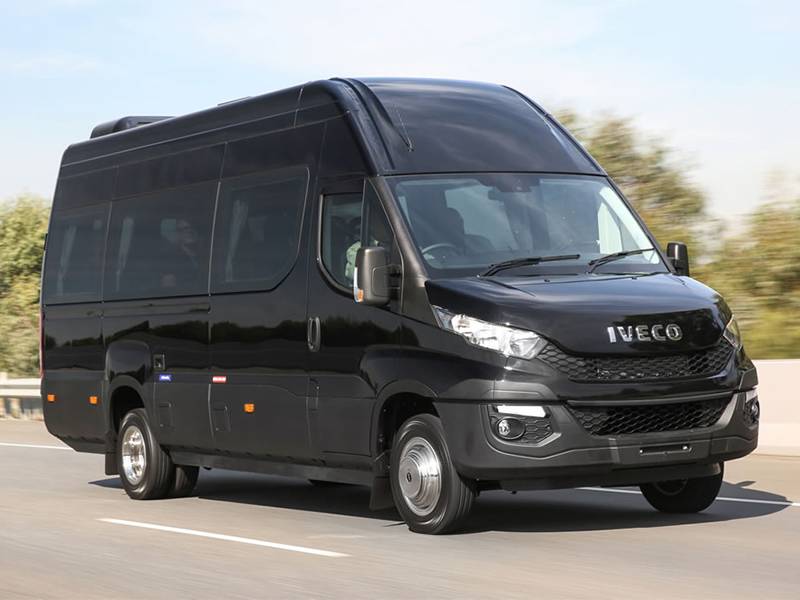 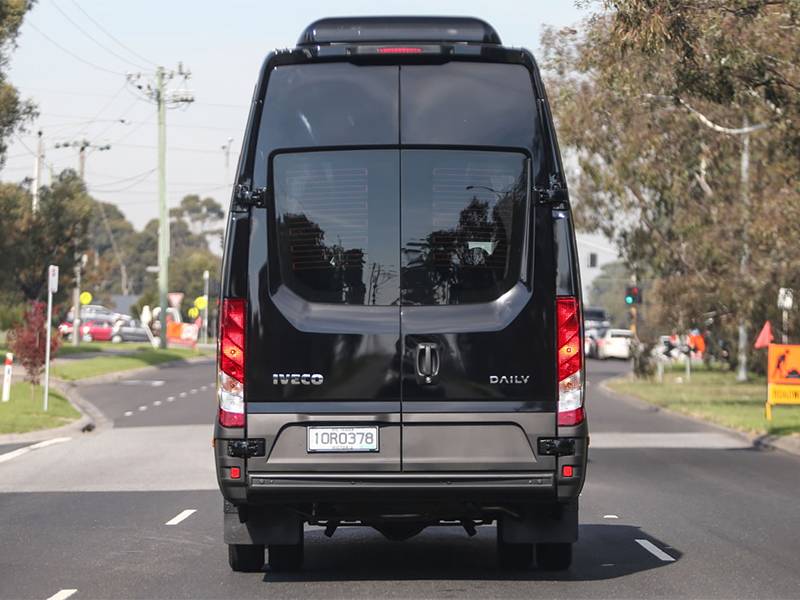 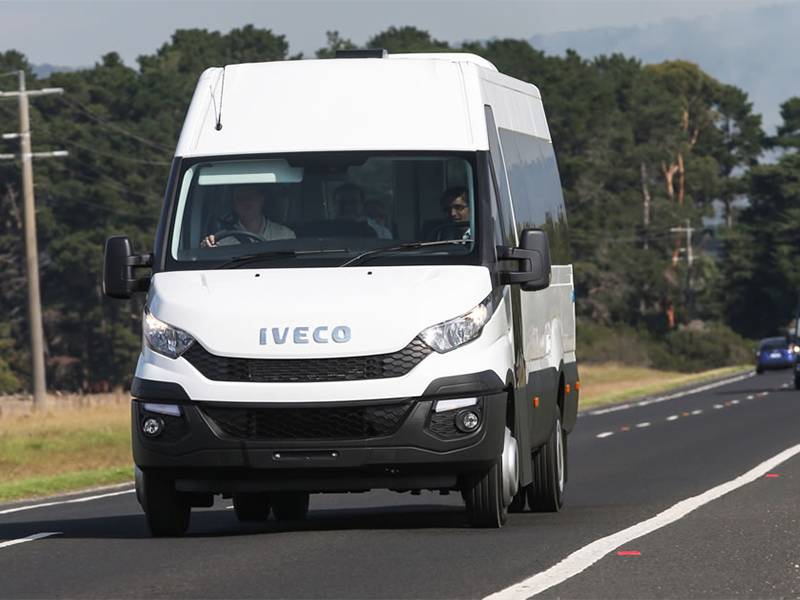